“Psychoanalysis and Diversity”–A Course that Matters 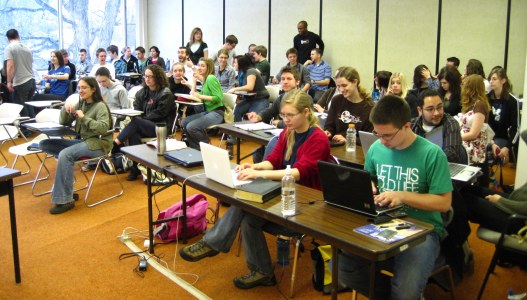 One way psychoanalysis matters entails its ever-evolving theorizing on issues of diversity, power, authority, and the sociocultural. Not only does this scholarship represent an important contribution to social-level intervention, it reflects the voices of scholar-clinicians who bring a psychoanalytic sensibility to work with individuals not traditionally deemed “appropriate” candidates for psychoanalytic treatment. Contemporary psychoanalytic literature describes richly textured and effective clinical process with racial/ethnic minorities, gay, lesbian, bisexual, and transgender individuals, those with lower socioeconomic statuses, people with disabilities, and others.

Graduate students in clinical psychology enter training having frequently been persuaded to dismiss psychoanalysis as ineffective, elitist, and irrelevant. Exposing students to this literature is crucial to demonstrate that psychoanalysis offers a unique perspective in understanding our contemporary multicultural context.  Also, one way to diversify the predominantly white membership of most psychoanalytic communities is to expose diverse groups of students to what psychoanalysis really can offer regarding issues of diversity in a course like the one I will describe next.

I developed “Psychoanalysis & Diversity” for doctoral students in clinical psychology at the Illinois School of Professional Psychology. There, I coordinate our “Psychoanalytic Concentration”–one of very few such programs around. The course exposes students to the extant psychoanalytic literature regarding issues of diversity, including an exploration of the impact of political oppression, stigma, prejudice, racism, sexism, and homophobia on psychological functioning. The “irony” isn’t lost on me that I, a white male, albeit a gay one, developed and teach this class.  The course has an applied focus and seeks to raise students’ awareness of and ability to address emotional reactions relative to difference and bias within the transference-countertransference matrix. Finally, students learn to manage the trauma of oppression and to promote resilience.

Following is a vignette representing one of several parallel processes and enactments of the very issues the course aims to illuminate and which occur regularly in courses like this. I use these in vivo experiences as a primary pedagogical modality to meet the course’s objectives.

A student who took the course describes one of these enactments:

… while I remember the (course) content, the emotional connection I felt deepened as we began discussing specific groups. The first day we did so, the topic was African-Americans. I stared at the screen for what felt like an eternity, perusing one article assigned for that day.  I hit “print” and promptly buried the printout of said article deep into my bag. I was mindful not to read the article while on public transportation and simply procrastinated. The article was titled “On three strands of meaning associated with the ‘N-word’ (the author employed the actual word) used during the course of a psychoanalytic treatment.” (Moss, 2009)  It’s probably clear which word I had been avoiding!

I attended class with a pit in my stomach. It was the first day of case presentations.  Dr. Pytluk had informed us during the first class that the first half of sessions would be focused on discussion of the readings and the second half on case presentations. I’m not sure how it happened on the day in question, but, uncharacteristically, we didn’t discuss the readings at all. Instead, a student asked a question that prompted Dr. Pytluk to share a case he was struggling with…It was a frustrating client who was toying with the idea of termination. Dr. Pytluk explored his many clinical dilemmas and the potential minefields in this case. He described navigating rocky waters and acknowledged uncertainty about his interventions. We didn’t talk about the articles, or African Americans for that matter, as Dr. Pytluk’s patient was Latina!

This enactment and another I will describe below both relate to a fundamental dilemma in the subjective experience of difference among oppressed individuals. In societal landscapes replete with dichotomization, in which, binaries such as male/female predominate, processes of “othering” are endemic.  Those who don’t occupy privileged statuses are either rendered invisible or stand out like sore thumbs (Rosenblum & Travis, 2011).  Before returning to the original vignette, which represents the invisibility side of the polarity, following is one associated with it’s opposite.

Early in the term, I was discussing that race isn’t primarily biological, but a  social construction of skin color. At this time, I found myself aware that the group consisted of six white people and one person of color, with a white man at the helm authoritatively defining race.  The presence of the student of color in the room was stark.  What might she be thinking and feeling in the moment and also in general in the course? So, clumsily and unartfully, I identified publicly that single person of color. I said something like, “for example, of course so and so across from me has darker skin than the rest of us and that’s a biological reality, but this only matters because society decides to make it matter.” Tension ensued.  The student’s shame in this public exposure was palpable.  A sore thumb if ever there was one.  So I used the moment to illustrate the “invisible-vs.-sticking-out-like-a-sore-thumb” dilemma.  I apologized for any emotional discomfort the student might have endured, but spoke of the inevitability of these kinds of moments in a society marked by social hierarchies and racial divides. The student of color accepted the apology and appeared to feel relief. She had been recognized and seen, no longer simply spotlighted, objectified, and tokenized.

The initial enactment I discussed actually began when I was creating the syllabus and considering assigning Moss’s piece in the first place.  I was drawn to it (at least consciously) because it attempts to explain how hate and its behavioral manifestations work in the individual.  Our focus would largely be on the experience of the oppressed and analytic treatment of the oppressed.  Given the course objectives, attention to the psychology of hate and the oppressor seemed crucial.  In a moment of disavowal, I registered a faint sick feeling, a slight foreboding. I thought about giving more time to the decision about assigning an article with that word in the title. I needed to reflect further. “You’re having feelings here, after all,” I said to myself.  Then, without much pause I responded: “No, just assign it. Any negative feelings will be part of the learning.” So, no real deep reflection. In retrospect, I think the feelings of concern weren’t only those of my students, or maybe not theirs at all, but my own.

Moss reflects on the vicissitudes of using the “N-word” and other epithets and Altman (2010) does something similar in his book The Analyst in the Inner City (a primary course text).  Their words are instructive:

“…In writing about the epithets, I myself have used them; the paper itself became another medium through which the pejorative epithets coursed…the rationale for using the pejoratives was that they are ‘real’ and, as such, they must be named and looked at.  In some sense, this conceptual move consisted of placing a mediating and separating layer of thought between me and the words…The epithet’s charge is metaphorically radioactive…Whenever I used them…I could feel that charge…and I could locate the pleasures, the powers, and the shame that adhere to the perjoratives’ use.” (pp. 836-838)

“I will conclude by expressing…concerning my use of the ‘N-word’ (Altman used the actual word)…I initially thought that I was using the word only to accurately portray the writing of others…But then I asked myself…where is my own subjectivity in the process of using this word in the way I did…?

…I have a sense of ‘getting away with murder’…in being able to use this word while attributing it to others—as well as horror about this possibility, and a sense of relief that perhaps I would be able to leave no…traces of my own racism…” (pp. 113-114)

Since my awareness of Moss’s and Altman’s conundra was only inchoate and my anxiety anything but, I found myself silencing discussion of Moss.   By unconsciously avoiding grappling with the traumatic history of racism against African-Americans in not facing the word that has come to embody its horrors (a history in which I am implicated  by virtue of my white privilege), I thereby silenced that history.  I made manifest the invisibility pole I referred to earlier.  I sent a message to the students, I fear, that this topic is just too hot to handle.  However, as the student cited above and others astutely pointed out (thankfully!), I addressed my “mistake” by talking about an agonizing case in which I made errors and about which I felt uncertain. One student said that I actually had made it easier for us to talk about charged readings later on and modeled how to present cases, removing the pressure to feel they had to present perfect work.  (Generous to let me off the hook!) I had inadvertently modeled the inevitability of struggle in both clinical work with minority groups and in society’s attempts to get out of the bed we’ve made—the patriarchal system, the great gap between the privileged and the oppressed.

When we ultimately discussed Moss and reviewed students’ experiences of the course, it emerged that identifying the enactment, discussing it, and working our way out of it together, was a particularly experience-near means of understanding the power of hate, how it infiltrates and spreads, how it is shrouded and denied, and also about the unconscious processes that occur on individual, interpersonal, and social levels simultaneously.  In a recursive process working on multiple parallel levels, beginning with Moss’s writing his paper, followed by the silencing of it, its analogy to the silencing of the history and ongoing presence of societal hate, and arguably a similar reenactment in the present discussion, we see how psychoanalysis is uniquely suited to illuminate the unconscious disavowed and enacted dimensions of power, hate, oppression, and marginalization.

Regarding my decision process around presenting this material here, how could I achieve something akin to what Moss hoped to do—offer something useful without being party to the system that oppresses, snuffs out spirits, and kills off. The risk of hurting anyone by uttering the “N-word” seemed sufficient to justify omitting this vignette.  I had interesting material to tackle without mentioning this messy thing.  But, what of the fact that the fundamental spirit of psychoanalysis is about giving voice, undermining silences, lifting repressions, and freeing painful, shame-riddled realities for reflection, play, and transformation?  Would silencing the most alive aspect of the course be tantamount to collusion with a disavowal of oppression of African-Americans by white people?  Would attempting the compromise so commonly made, namely the use of the phrase “the N word,” amount to an effort to take the sting out of an epithet that even referred to indirectly has the potential to do just that, sting and wound?  This time, as I considered this newsletter article, I believe I wasn’t wholly fooled and ruled by my unconscious. I subjected the question to deep reflection and consultation.  Hopefully not mistakenly, and I am willing to take full responsibility if some believe this has been a mistake, I decided to move forward with the discussion and did aspire to neutralize the effect of using the actual word in the service of what I hope has been an instructive exposition of the realities with which we must grapple in teaching the issues laid out here. Psychoanalysis must continue to face these realities head-on, not only in its theorizing and healing efforts, but also its envisioning of who can be psychoanalytic clinicians and patients, of who will be its future stakeholders.

Moss, D.  (2009). On three strands of meaning associated with the word nigger used